John Stewart loved horses. He also loved everything that went along with horses. The behind the scenes stuff that only someone who had lived a big part of their early lives surrounded by the horse racing scene. John’s father was a horse trainer. He worked with trotters and pacers; primarily in California but also in Kentucky.

John was fascinated by the horses as is evident in many of his songs. One of my best memories is of John singing Let the Big Horse Run in Lexington, Kentucky, at the Woodsongs Radio Show. The audience went wild. Later in his life he became friends with Julie Krone and her husband Jay Hovdey. They were both very kind to John and their friendship lasted until John’s death. Julie, of course, was a great jockey and the only woman to ever win a Triple Crown race. Jay is a terrific writer for the Racing Journal. Together, with their daughter Lorelei, they gave John many hours and days of fun at the track.

So here’s a song for Derby Day. It combines two of John’s best themes; horses and losers. Though the horse isn’t the loser in this song.

I’m not a gambler but maybe a double sawbuck on Rosie riding Pants On Fire today at Churchill Downs. 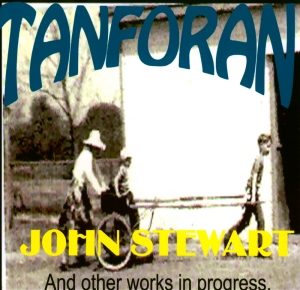 In this picture, John is pulling his brother Michael, followed by their mother